Fifteen years ago, I supported the two state solution vision from the Oslo Accords of creating a Palestinian homeland in Judea, Samaria and Gaza.  However, my support for such a model dwindled with each year.  It is not a question or right or wrong, but a question of realities on the ground.  Let’s look at some of the recent history:

There are other events that happened, including a war with Hezbollah, the Arab Spring, rise of ISIS and Iran Terror Proliferation/ Nuclear Ambitions.  The key items that I take away from the above is the agreements that were proposed and negotiated in 2000, 2001 and 2008 had the recipes for success.  Two sticking points have been refugee right of return and recognition of Israel as a Jewish State.  From what I have read, compensation for lost property is part of the agreement, but refugees can only return to the West Bank or Gaza.  As to recognition of Israel as a Jewish State or Homeland for the Jews, I think the two are linked and that the Palestinian Leadership has their eyes on all of Israel.  Maybe not in the short term, as they maybe treating a peace deal as a hudna.  Otherwise such recognition is in my opinion quite reasonable.

Since the aforementioned negotiations, the Palestinian Authority has chosen to stop engaging with Israel and is pursuing recognition and their terms via international venues.  Considering the repeated wars with Gaza, Israelis are less optimistic of an independent Palestinian state in the West Bank.  Many, rightly so, envision Fatah being quickly replaced by Hamas.  This would result in a much worse security situation than what is already painful today (i.e. Palestine becomes Hamastan).  You just have to look at a map to understand the proximity issues to Israel’s major cities, namely Tel Aviv, Haifa, Jerusalem and Beersheba. 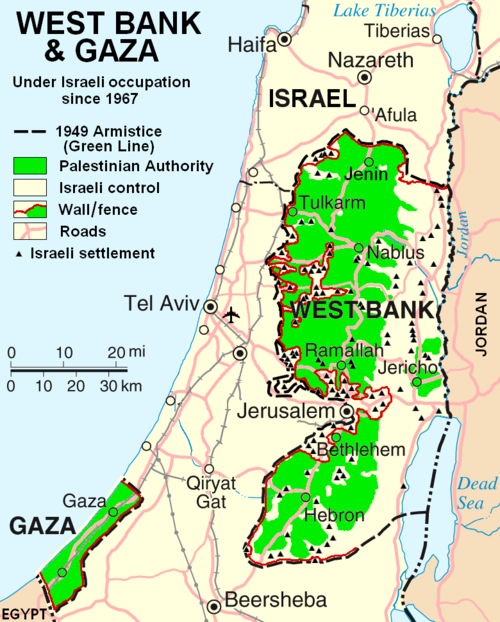 Israel could keep the status quo, i.e. containment of the Arabs in the West Bank and Gaza until they are able to reasonably affect self determination.  It has been 20 years since Oslo II with very little progress, some might say just the opposite and that we’ve seen regression.  Or does Israel try another experiment/ solution, like:

Nevertheless, I think Israel well within their rights to declare the Oslo Accords null and void.  New thinking is warranted, as the Oslo dream of two states seems to be on life support.  Whether the patient is brain dead is up for debate.

2 Replies to “Is the Two State Solution Dead?”